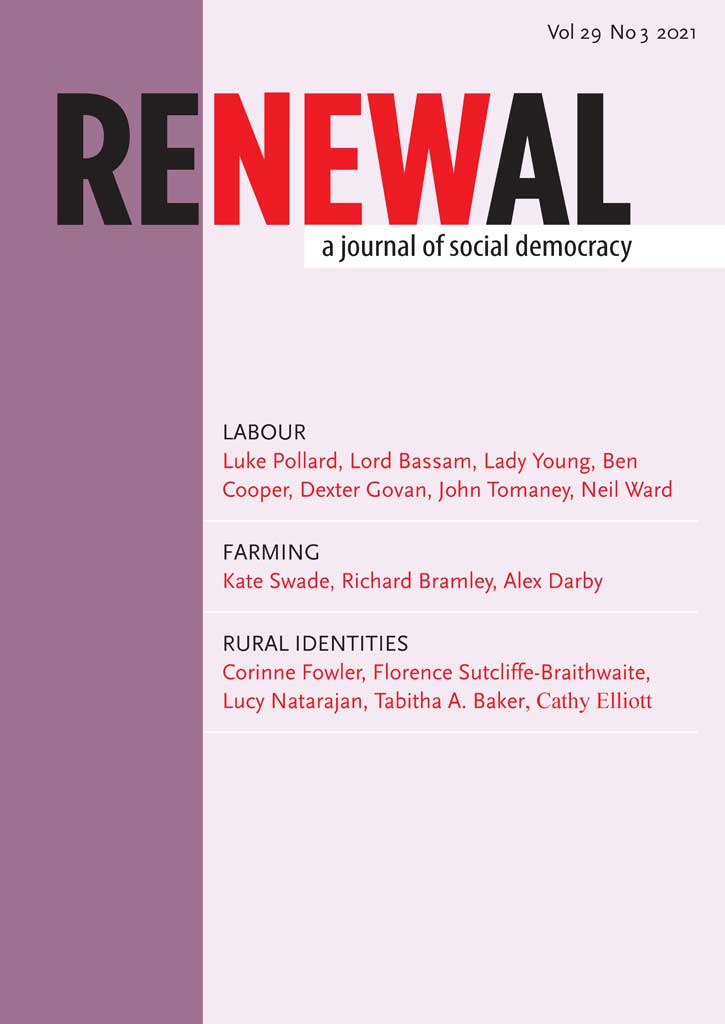 Why I Guest Edited a ‘Rural’ Edition of Renewal Journal

I grew up in a village on the northern outskirts of Greater Manchester. The Guardian once, to my horror, called it a ‘villagey suburb’ but as a teenager it felt pretty rural to me – whether I was escaping into the beautiful nearby countryside to think my various Gloomy Teenage Thoughts or waiting in the freezing cold for the inadequate bus service. I left, as people do, to go to University. And when I came back to Greater Manchester not long after getting my degree, I stayed in the same borough, but a good ten miles to the south, nearer the city, the jobs, and all the bright lights of the urban centre.

I joined the Labour Party around that time, and it was probably in one of the first meetings I went to that someone expressed frustration that the local council always put pictures on their website of the part of the borough I’m from – the pretty bits where, people felt, they don’t vote Labour – and not the town centre or urban areas. (There aren’t many pictures on that site at all now – I expect because of Tory cuts.) Anyway, I saw their point, but there was always a bit of me that felt a bit strange about the assumption that rural and semi-rural areas didn’t need the things that the Labour Party is supposed to offer. We weren’t rich. We needed support for our school, and health service, and the occasional bus that we’d better not miss or we’d wait hours –  and I mean hours, not 15 minutes – for the next one.

Friends from minority groups also joked that they felt nervous about rural areas, feeling that they stood out, wouldn’t belong, might get charged by a cow or a local, or wouldn’t be able to find a good cup of coffee. I laughed along and I understood where they were coming from. The population of countryside does seem quite white compared with London or Manchester. But there were people of colour in our village and at my school. There was plenty of racism too – which must always be robustly addressed – yet there is racism everywhere, not only in the countryside. And the landscape of working and defunct textile mills was a clear reminder that our history was deeply embroiled in the British Empire with all that that history entails. And in fact you could get a perfectly good coffee in a range of cafes and pubs around the area. In summary, there is something deeply othering about the assumption that people living in rural areas are particularly intolerant or racist, or that sexual minorities or anyone a bit different should run to the nearest city to be safe. And also, for that matter, in the assumption that city folk, including minorities, don’t need the solace and beauty of natural and rural landscapes.

I’ve thought a lot more about belonging and nature and the countryside since those days, so when the opportunity came up to guest edit an issue of Renewal on all things rural, I jumped at the chance. This is the journal I would have liked to brandish and discuss back in those Labour branch meetings! And I was very glad of the support of Labour: Coast&Country in putting it together, with a particular thanks to LCC’s Hywel Lloyd for a lot of string-pulling and suggestions that made the special issue a reality.

You can read it from today with several great articles free-to-view including a fantastic discussion by Luke Pollard MP, Shadow Secretary of State for the Environment, Food and Rural Affairs of the Rural Review he leads. It was particularly welcome to see him advocate both nature-based solutions and listening closely to farmers and rural people. Also liberated from the paywall, Corinne Fowler has contributed a wonderful piece drawing on her experiences with the National Trust in telling truthful and comprehensive histories about our country houses and their involvement in empire and enslavement. Kate Swade from Shared Assets provides an inspiring vision of how rural livelihoods could be transformed if we changed the way we think about the land. And Alex Darby reviews James Rebanks’s bestselling English Pastoraland finds a politics of compassion within it that help us rethink relationships with the land and food that sustain us.

If your library doesn’t have it already, for a mere £25 for a full year’s digital subscription to Renewal (including lots of rural coverage to come), there is more. You could read Lord Bassam and Baroness Young’s explanation of the Lords’ reports into ‘left behind’ places. Ben Cooper of the Fabians gives a rundown of the polling, showing the scale of the challenge as well as the potential the rural vote. These figures are useful to read alongside Tabitha Baker’s in-depth qualitative research on how rural voters think and feel as well as Lucy Natajaran, Florence Sutcliffe-Baker and John Tomaney’s discussions of life and community in Sacriston, County Durham. Richard Bramley tells it like it is with his view from the sharp end of farming. Whilst these pieces bring to life the countryside in all its complexity and potential, Neil Ward finished the edition off with a look to the future and provides a non-metropolitan manifesto for Labour to consider.

I learned a lot from curating this fine collection of articles, as I explain in my editorial (also free to view). I already knew that the countryside wasn’t white, but it is always salutary to remind ourselves of just how deeply intertwined the history of our most treasured landscapes is with dark, satanic imperial histories. I knew also, from my own experiences, that the countryside isn’t necessarily either affluent or conservative.  However, both the quantitative and qualitative articles really brought home to me how recently Labour was winning huge swathes of rural England and how important Labour reforms and policies have been, and could again, be in the countryside. Rural issues have never been peripheral to traditional Labour ideas and concerns and they cannot be so now. Perhaps most inspiring have been the glimmers of hope for a rural future with thriving nature alongside high quality food production, better infrastructure (including, as Lisa Nandy used to remind us, buses!), and bringing more younger people and people of colour into farming, not least through the things Labour can do in local government, such as supporting council farms.

I hope you will enjoy reading it – I’m sure that all members of Labour: Coast&Country will find something that chimes with their concerns. And at least it might keep you occupied whilst you’re waiting in the cold for that expensive bus that never seems to arrive.